For best results, use the HD button on the video’s lower right. You can also make it full screen. Keep in mind that the video can be stopped by clicking on the pause button on the lower left corner or directly on the screen. Here’s the short video:

The Richard McLendon Music Website has a new look! Please take some time, explore, watch, listen, and let me know what you think. Thank you for your interest and for visiting https://rcmclendoncomposer.com/

The film premiered in Chicago at the Mid-West International Band & Orchestra Clinic in December of 2017. It is not for theatrical release and is shown to instrumental music educators at state, regional, and national music education conventions.

The film was produced and directed by Deborah Bradley, narrated by Gene Fender, with original music composed by Richard McLendon (who was also the film’s editor). This color film was created using Adobe Premiere Pro CC 2018.

McLendon Will Score Music for The John Philip Sousa Foundation

Richard McLendon will be scoring music for a film focusing on the various band-related projects of The John Philip Sousa Foundation. The film will feature some of Sousa’s music, but will use McLendon’s music for a film that will focus on the non-profit foundation that is dedicated to the promotion of international understanding through the medium of band music. The film will be used at various events around the country by the Sousa Foundation. It is an exciting opportunity for me to assist this film’s realization.

Making short samples, grouping them into a genre of music, and sending them to a director has never been so easy. I can be anywhere on or above the planet and upload a new track. There are more features and it is much better than other platforms that I have used. As a composer, ReelCrafter is one of my helpful tools that I now use.

Another method of making my service known to others.

Hans Zimmer, one of the most prolific film composers of all time, teaches this internet course in writing music for movies. The German composer, who had no formal musical training, has scored the soundtracks for more than 150 films including “The Lion King” — for which he won an Academy Award — as well as “Gladiator” (2000) “Pirates of the Caribbean” (2006), “The Dark Knight” (2008), “Inception” (2010), and “Interstellar” (2014). Zimmer teaches aspiring filmmakers and composers how to use music to tell a story. 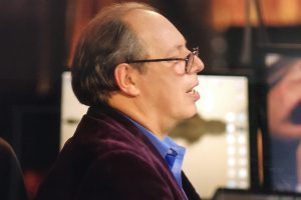 I’ve completed Richard Bellis’ video tutorials that are designed to be helpful for film and media composers of all levels: Aspiring, Emerging and Veterans. Bellis is also the author of The Emerging Film Composer.

Bellis has worked as an actor in movies such as the sci-fi classic “Them!” (1954) and on TV from “Cheyenne” to “Batman. He has also worked as a composer winning an Emmy for “It” (1990) and was nominated for HBO’s “Doublecrossed” (1991) starring Dennis Hopper. He has served as past president of the Society of Composers & Lyricists, and served on the faculty of the University of Southern California, where he lectured for 11 years in the Scoring for Motion Pictures and Television program.

A Former Music Student Mentions Me

One of the very best highlights of my time in Los Angeles was getting to spend time with someone that is a highly successful composer and orchestrator in TV/film music and game music, Penka Kouneva.  This was such an exciting experience for me and made a fantastic impact on my thinking.

In her home studio, Penka spent time quizzing me on what I know, discussing the challenges of film music, listening to my original music and giving me priceless pointers and ideas, pointers on getting hired, and urging me on. It was the best 3+ hours I have ever spent. This experience was inspirational and I am forever grateful to Penka for her valuable time and guidance.  Thank you, Penka!  You have my admiration and respect!

NOTE: I have a picture of me sitting with Penka in her home studio, but she made me promise NOT to show it; something about hair and makeup. Its a woman’s prerogative. She is also sitting 2nd from the left in the photo under the news article about the Women’s Composer Panel.

This was an event held at the American Film Institute with some of the leading women film composers.  Left to right in the picture are Miriam Cutler, Penka Kouneva, Deborah Lurie, Laura Karpman, Lolita Ritmanis, and Kathryn Bostic.  In addition to discussing their particular contributions to film, there was a discussion about the difficulties of being a women and being hired as film composers.  P.S.:  Their music was really great! They know what they’re doing!

Two days of intensive sessions, panels and masterclasses on the essentials of game music and sound, designed for those coming from Film, TV, music and other traditional media. Brian Schmidt is the founder and creator of GameSoundCon.

This was a great opportunity to watch and listen to well-known Academy Award-nominated composer, David L. Newman.  He offered some great great exercises on conducting and demonstrated his approach to conducting and communicating with an orchestra and how to improve.  This event was sponsored by the Academy of Scoring Arts.

The NAMM Show is an action-packed global industry event where you can expand your share of the market with face-to-face meetings, product demos, idea-filled sessions and networking opportunities. As a trade-only event, The NAMM Show is attended by companies that meet the association’s membership criteria (generally those that manufacture, distribute and/or retail musical instruments/products), as well as trade and consumer-focused media outlets.  Its also a great opportunity to visit with old friends and make new ones.

Two days of intensive sessions with Mark Stolaroff, and Tom Provost, as well as guest speakers on the nuts ad bolts of no or low budget film making.  Mark Stolaroff is an independent producer whose latest films have premeired at the 2013 Tribeca Film Festival and the 2013 Los Angeles Film Festival.  Both weekends were at the Charlie Chaplain Theater in Raleigh Studios which is one of the oldest studios in Hollywood dating back to 1915.  It is located on Melrose Avenue across the street from Paramount Studios.

Two days of intensive sessions, panels and masterclasses on the essentials of game music and sound, designed for those coming from Film, TV, music and other traditional media.  Brian Schmidt is the founder and creator of GameSoundCon.

This is the 3rd annual Film ComposersLab: L.A.  Peter Golub, Director of the Sundance Institute Film Music Program, hosted the day’s events. The Downtown Independent aws the venue location and is a theater/cinema located in the Little Tokyo area of Los Angeles. It was a fantastic day that was a condensed version of the Sundance Institute’s more intensive annual Composers Labs.

Peter, Thomas Newman, Adam Smalley, Scott Johnson, Robert Messinger, Scott Holtzman, Doreen Ringer-Ross, Rolfe Kent, Aaron Zigman, and Clint Mansell, were guest speakers who presented their experiences, their views, and their methods, as well as answered questions and made themselves available for meeting afterward. I also got the chance to finally meet composer and orchestrator Penka Kouneva.

The inaugural event, hosted by the Chattanooga Symphony and SFMS Artistic Director, George S. Clinton, was the beginning of a new chapter in my composing life.  In addition to George, Don Davis, Peter Golub, and Doreen Ringer-Ross made presentations, and George, Peter, and Don conducted some of their film music with the Chattanooga Symphony in concert. It was a wonderful weekend filled with professional networking, concerts, seminars, and good food.